AVZ Minerals managing director Nigel Ferguson believes it is the “disruptor” EMEA EV battery hopefuls are waiting for and that can certainly cement the DRC’s central place in regional new-energy supply chains.

To that end, AVZ is working as fast as it can in a COVID-19 constrained world to put in place start-up financing for its 60%-owned Manono Lithium and Tin Project on the mid-Proterozoic intracratonic belt stretching over more than 1,000km through Katanga and into southwest Uganda.

Working from AVZ’s head office in Perth, Western Australia, Ferguson is talking virtually around the clock with government officials, financial groups, intermediaries and firms positioned all the way along what are still embryonic battery and energy storage supply lines through Europe, the Middle East and southern Africa about financing, offtake, infrastructure and downstream processing options for a project shown by AVZ’s recently posted definitive feasibility study to occupy a unique place on the list of the world’s key emerging hard-rock lithium ventures. 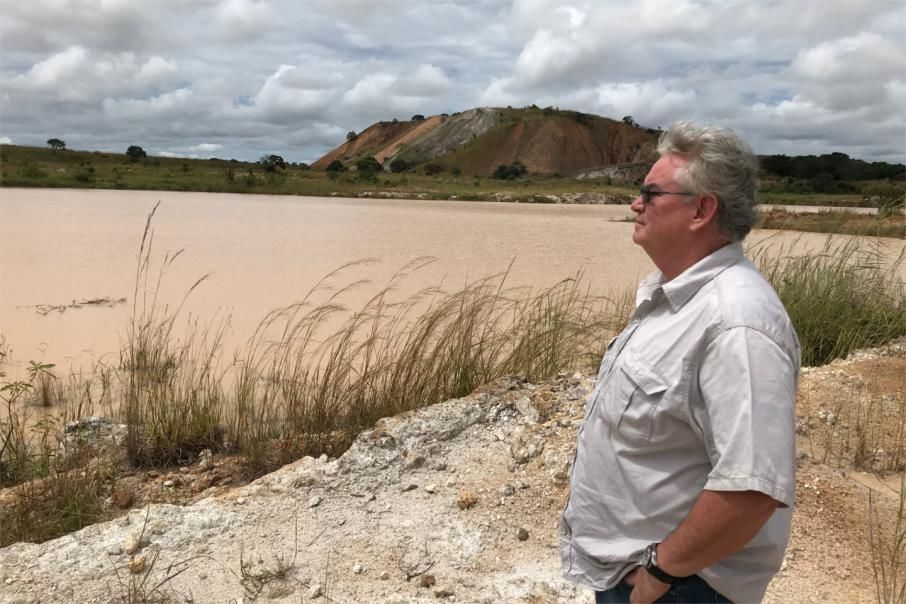 Nigel Ferguson at Manono: “It’s not just about being the biggest in the pack, it’s very much about that scale translating into value, which comes back to quality”

“We’ve heard European car and battery makers talk this year [via webcasts] about the 18 new battery manufacturing plants pegged to come on board in Germany alone – maybe 400GW of battery capacity – and then someone puts their hand up on the panel and says, that’s really great.

“Where are you going to get your [lithium] hydroxide from?

“And they just look at each other blankly.”

The high-grade, low-impurity, 400 million tonnes of 1.65% Li2O at Manono (JORC resource underpinning the DFS) has got downstream users of lithium sulphate, including proponents of new lithium hydroxide plants, very excited.

AVZ’s DFS base case envisages a US$545.5 million initial project producing 700,000 tonnes per annum of chemical grade lithium spodumene concentrate (SC6) and 45,375t of primary lithium sulphate over at least 20 years – that’s with SC6 averaging about US$674/t and lithium sulphate US$7,355/t in future.

The DFS projected US$3.779 billion of NPAT ($2.267 billion for AVZ) after a 2.25-year capex payback before the project sees any benefits from a new DRC Government-approved Special Economic Zone at Manono, and ahead of a potential halving of in-country rail transport costs included in the study, in line with competitive rates in neighbouring countries.

Ferguson is also quick to highlight upside for AVZ in the form of the adjacent Carriere de L’Este lithium pegmatite – “we’re expecting that to be 600Mt of even better quality material [than Roche Dure]” – and ongoing alluvial tin production from widespread sources mined for more than a century.

The Roche Dure resource compares with 223Mt grading 1.27% Li2O at the Pilgangoora hard-rock mine in Western Australia of Pilbara Minerals (ASX: PLS), which has a current market value of about A$680 million, and the 189Mt of 1.5% Li2O at Earl Grey in WA that Wesfarmers paid A$776 million for 50% of last year. 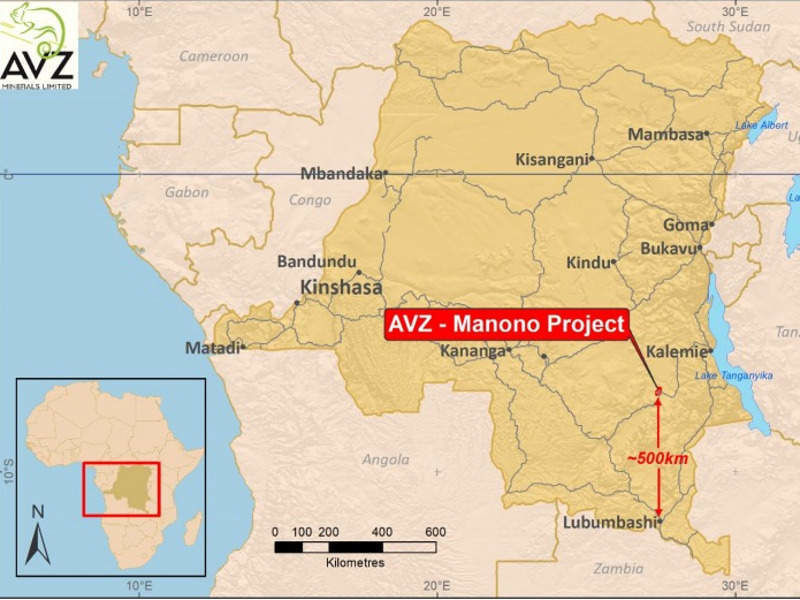 “We think this project is completely different to every other project out there because it is so large – we’re not talking about 10m-wide zones, it’s 200m,” says Ferguson.

“But it’s not just about being the biggest in the pack, it’s very much about that scale translating into value, which comes back to quality.

“It’s the nature of the beast at Manono, with such a big, wide [pegmatite] body; it’s cooled slowly, so we’ve got large crystals and a cleaner pegmatite. We’ve literally got, one side to the other, a single zone, and the wall rocks are black, and the pegmatite is white … so we can just strip it down either side and not worry too much about dilution. It’s pretty much 1.65% all the way through.

“SCT, which has designed about 85% of all the hydroxide plants in the world, have said they’ve never seen such a clean product – just really high grade and no detrimentals of any issue whatsoever. We have low fluorine, very low phosphorous, the iron is down to 0.4% in the product … and we’ll probably get that down further with more tweaking. There is 2-4% mica in the body itself, but once it’s processed it’s down to … less than 1.5% mica, and we’ll get that down further too.”

Following a recent A$10.7 million share placement to Chinese lithium battery raw material developer Yibin Tianyi Lithium, AVZ is advancing early works at Manono and last month called for tenders for about US$300 million of pre-mining infrastructure packages, with contracts to be awarded when AVZ and partners, state-owned Cominiere (25%) and privately-owned Dathomir (15%), make a Financial Investment Decision to mine.

“We are looking at financing options out of Europe, out of the Middle East, where there is strong interest in EV batteries that need a nearby supply of lithium hydroxide, and we also have a third string to the bow in South Africa, where there are also groups very keen to have a battery manufacturing plant there to support their car industry, which is mainly German producers,” Ferguson says.

“There are various options related to offtake, downstream processing ventures, development and mainstream finance and equity, that we need to assess.

“There is certainly a very clear realisation that projects of this scale and quality do not come along  often and they lend themselves to strategic investment and developments.

“It really starts with a very large, good quality project in Africa, with a solution to get the product out. We see at least two ports on either side of the continent that would give us options to send products – concentrates or containerised sulphate – anywhere we want. Dar es-Salaam in Tanzania and Lobito in Angola, offer security and the numbers [cost] are looking good at this point.

“Walvis Bay in Namibia is another option … and we’re still looking at those end-user options in South Africa.

“The general idea, initially, is to get products to end producers, or converters.

“But then I’ve always thought this business needs to be fully vertically integrated.

“So, ideally, we go up the value chain, possibly with partners down the track. Having some sort of hydroxide plant is a logical extension of that and hence we’re entertaining the idea of putting a hydroxide plant somewhere in the Middle East or Europe.”

Purvi2 years ago
147
April 15 (Reuters) - Mining investment firm TechMet, which counts the U.S. government as its largest investor, said on Thursday it had closed its second round of funding at $120 million, roughly 50% higher than initially expected. The firm, which controls battery recycler Li-Cycle Corp, has now raised nearly $133 million between its two rounds of funding. TechMet plans to use the funds to continue investments in mines and other projects that produce metals used to make electric vehicles. "Our industry must completely transform itself in order to supply these strategic materials...
Battery Materials

Purvi2 years ago
92
BORON, Calif.--(BUSINESS WIRE)-- Rio Tinto has commenced production of battery-grade lithium from waste rock at a lithium demonstration plant at the Boron mine site in California, United States. The demonstration plant is the next step in scaling up a breakthrough lithium production process developed at Boron, to recover the critical mineral and extract additional value out of waste piles from over 90 years of mining at the operation. An initial small-scale trial in 2019 successfully proved the process of roasting and leaching waste rock to recover high grades of lithium....