JOHANNESBURG (Reuters) – West Africa-focused Endeavour Mining EDV.TO has agreed to buy Teranga Gold TGZ.TO in an all-share deal to create a top 10 gold producer which will list in London, the companies said on Monday, a week after they announced they were in talks.

The agreement is a breakthough for the fragmented gold sector and for Endeavour, whose previous attempt at a major merger failed.

But with investors jittery about pricey takeover deals after a surge in gold prices XAU=, Endeavour’s shares fell 2.4% to 30.19 Canadian dollars, while Teranga Gold – which climbed after the talks were announced last week – fell 1.1%.

“We’re not trying to buy cheap – we’re just trying to make the right deal that satisfies both sets of shareholders and that ensures the maximum support and maximum return going forward,” Endeavour CEO Sébastien de Montessus said in a telephone interview.

Endeavour will pay 0.470 of its own shares for each Teranga share, a 5.1% premium based on Friday’s closing prices – valuing Teranga, whose shares are up 97% this year, at 2.6 billion Canadian dollars ($1.99 billion).

De Montessus said Barrick Gold ABX.TO, which holds 11.44% of Teranga shares, supported the deal. Barrick CEO Mark Bristow has been calling for consolidation to get rid of weaker players.

Endeavour shareholders will get 66% of the combined entity, leaving Teranga shareholders with the remaining 34%. Teranga will get three seats on the board to Endeavour’s seven.

The enlarged Endeavour would seek to list in London in 2021.

As the largest premium pure gold producer in that market, it would eventually aim for entry into the FTSE 100 index, thereby increasing the pool of investors and luring more generalists.

For the London market, a listing would plug a gap left by Randgold’s departure following its merger with Barrick ABX.TO completed at the start of 2019.

Endeavour’s Teranga acquisition adds another operating mine – Wahgnion – to the four it has in Burkina Faso. It also gives exposure to Senegal with the Massawa project, which Teranga bought from Barrick Gold last year.

Endeavour has made no secret of its ambitions to grow.

In 2019, talks with Egypt-focused Centamin failed to deliver a deal, but in March, Endeavour bought Semafo, creating the biggest gold producer in Burkina Faso.

The much bigger Teranga deal would create a group with average annual production of more than 1.5 million ounces per year at a production cost of around $850 per ounce. Endeavour aims to be in a net cash position by mid-2021 based on current gold prices.

De Montessus said he had no further acquisition plans, “no intention” of growing beyond 2 million ounces and that the company has organic growth potential.

Analysts at Berenberg said in a note the merger would help to balance Burkina Faso risk with “long-term production from a lower-risk jurisdiction (Senegal)”.

Burkina Faso is battling an Islamist insurgency in its eastern borderlands with Mali and Niger. A militant attack a year ago on a convoy of mineworkers killed at least 37 civilians near the Boungou mine – part of Endeavour’s portfolio following the Semafo deal.

De Montessus, who has overseen Boungou’s restart and a security overhaul, said support from France’s Barkhane forces has improved the security situation.

Endeavour and Teranga also negotiated debt refinancing as part of the deal, which they said would save the group around $40 million a year over the next several years. 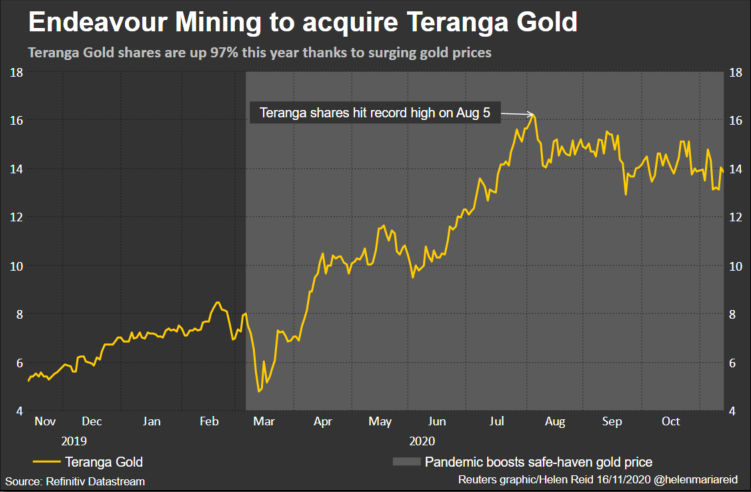 Purvi1 year ago
192
Nornickel will minimise its final dividend for 2020 to fund planned investment in production growth and improving its environmental footprint, the...

Purvi1 year ago
184
MELBOURNE, Australia--(BUSINESS WIRE)--Rio Tinto has entered into a binding Heads of Agreement (HoA) with Turquoise Hill Resources (TRQ) for an...
Burkina FasoDealsGold

Purvi1 year ago
106
Thor Explorations Ltd. (TSX VENTURE: THX) (“Thor” or the “Company”) is pleased to announce that it has signed an agreement with Barrick Gold Corporation (“Barrick”), which terminates the 2015 Earn-In Agreement between Thor and Acacia Mining PLC (Acacia Mining PLC has subsequently been acquired by Barrick), on the Central Houndé Project (the “Project”) in south-western Burkina Faso (the “Agreement”). Following the signing of the Agreement, Thor has acquired Barrick’s 51% ownership of the Project in exchange for a 1% Net Smelter Royalty. Thor now holds 100% of the Project. The...
GoldMarketsSouth Africa

Purvi1 year ago
78
The Johannesburg Stock Exchange (JSE) has discontinued some major market indices, including the closely watched gold index, to reflect the change in prominence of some companies and sectors in the economy, it said on Tuesday. The JSE Ltd follows international standards of classification of sectors and it modified some indexes to reflect a more realistic and detailed evolution across sectors, JSE said in an emailed response to Reuters. Under the modified index, it has decommissioned gold and platinum indexes and has moved all of them, including diamond mining companies, under...