On January 15, 2021, the Ministry of Industry and Information Technology (“MIIT”) issued the draft version of the Regulations on Rare Earth Management to gather public opinions until February 15, 2021.

Through this upcoming regulation, China intends to protect its national interests and industrial security as well as prevent activities, such as illegal mining, destructive mining, unplanned and over-planned production, illegal trading of rare earth products, and destroying the ecological environment, among others.

What are rare earths?

Rare earths are relatively abundant in the Earth’s crust, but minable concentrations are less common than for most other mineral commodities; this is partially the reason why they are such an important resource.

What are the industries where rare earths are deployed?

Rare earths are widely deployed in various industries, including electronics, clean energy, aerospace, automotive, and defense, while the end use of rare earths include, for instance, the production of magnets, catalyzers, and displays. This makes them immensely valuable to high-tech industrial manufacturing and R&D.

The manufacturing of magnets represents the single largest and most important end use for rare earths elements; permanent magnets are an essential component of modern electronics like cell phones, televisions, computers, automobiles (including electric vehicles), etc.

Hence, once the Regulations become effective, they might not just impact Chinese companies at the national level, but foreign companies in Hainan as well as the larger material supply chain. The draft Regulations cover the entire chain management of rare earths in China and limits scope for the export of rare earth products, providing for the applicability of the Export Control Law. Read more: China’s Export Control Law Explained – China Briefing News (china-briefing.com)

What will be the impact of the draft Regulations on rare earths’ exports?

The draft Regulations expressly state that enterprises that perform import/export of rare earth products shall abide by laws and regulations, such as foreign trade and export control.

China has the largest known rare earth reserves worldwide and is one of the major producing countries of these elements, while Canada and Australia are expected to offer significant sources in the future.

According to the data provided by the General Administration of Customs, in 2020, China’s total export volume of rare earths reached 35,447.5 tons for the whole year, down by 23.5 percent year-on-year, and the lowest figure in the last five years. China’s exports of rare earths have been decreasing in recent years – in 2019, the total export volume was down by 12.6 percent year-on-year.

According to data provided by the Center for Strategic and International Studies, in 2019, Japan was the top destination of Chinese rare earths, followed by the US, alongside the Netherlands, South Korea, and Italy. These five countries imported a combined 87.8 percent of China’s rare earths’ exports in 2019.

The progressive decrease of rare earths exports can be attributed to the fact that China has high ambitions for innovating high-technology and becoming more self-sufficient in key technologies. This is considered as intrinsic to the safeguard of its national interests, particularly in the aftermath of the US-China trade war and pandemic. China is also keen to lead the formulation of new industrial standards in emerging industries, including for the Internet of Things technologies.

In addition to this, the pandemic saw several countries – especially within the EU – almost suspend production activities in various industries in 2020, which likely contributed to the sharper drop in Chinese rare earths exports.

How are rare earths regulated under the Export Control Law?

The draft Regulations state the applicability of the Export Control Law (“ECL”) to the export of rare earths, which will affect industries dependent on these exports. Rare earths products will likely have to go through the export approval procedure provided by the ECL. This implies that the State Export Control Administrative Departments may deny its approval and prevent rare earths’ export when it deems it is necessary.

In light of the above, foreign enterprises that carry out import/export activities related to rare earths from China must ensure that they are acting in compliance with ECL provisions. They may also need to plan ahead when sourcing rare earths – in case the request for trade activity is rejected.

Key provisions of the draft Regulations

We highlight the main provisions of the draft, providing a short analysis of the system introduced by the upcoming regulation, including the applicable penalties when a violation occurs.

Rare earth smelting separation refers to the production process of various single or mixed rare earth oxides, salts, and other compounds that are produced after smelting and separating rare earth mineral products.

Rare earth metal smelting refers to the production process of using one or more rare earth oxides as raw materials to produce metals by molten salt electrolysis, metal thermal reduction, or other methods.

The draft introduces a coordination mechanism between different departments, at or above the county level, stating that each department will be responsible for the matters of its competence concerning the management of the rare earth industry. Policies and resolution of any major issues related to such field will be established by the State Council.

In addition, the draft provides mandatory approval procedures for investments in rare earth mining, smelting, and separation projects, the details of which are provided by the Regulations on the Administration of Enterprise Investment Project Approval and Filing. Without approval, no unit or individual may invest in the construction of rare earth mining, rare earth smelting, and separation projects.

The Department of Natural Resources of the State Council defines a strategic reserve of rare earth resources and rare earth products. The local people’s government at or above the county level is responsible for the supervision and protection of the national strategic reserve, which shall not be exploited without the approval of the Natural Resources Department of the State Council.

The State Council’s industry and information technology authorities, together with the State Council’s development and reform, natural resources, and other departments, will establish targets for rare earths’ mining, smelting, and separation (“Targets”) as well as determine the total quota usage plan, to which enterprises engaging in the said activities, will have to comply.

The State Council’s industry and informatization authorities together with other competent departments, will implement a traceability information system through which they will collect data related to rare earths mining, smelting, and separation activities. Such data will have to be uploaded directly by the enterprises that will have to indicate production and sales data as well as packaging and invoice information. The packaging of rare earth products shall comply with relevant mandatory national standards and indicate the enterprise that provided the rare earth products.

When an illegal activity is ascertained, the draft Regulations provides for applicable penalties. 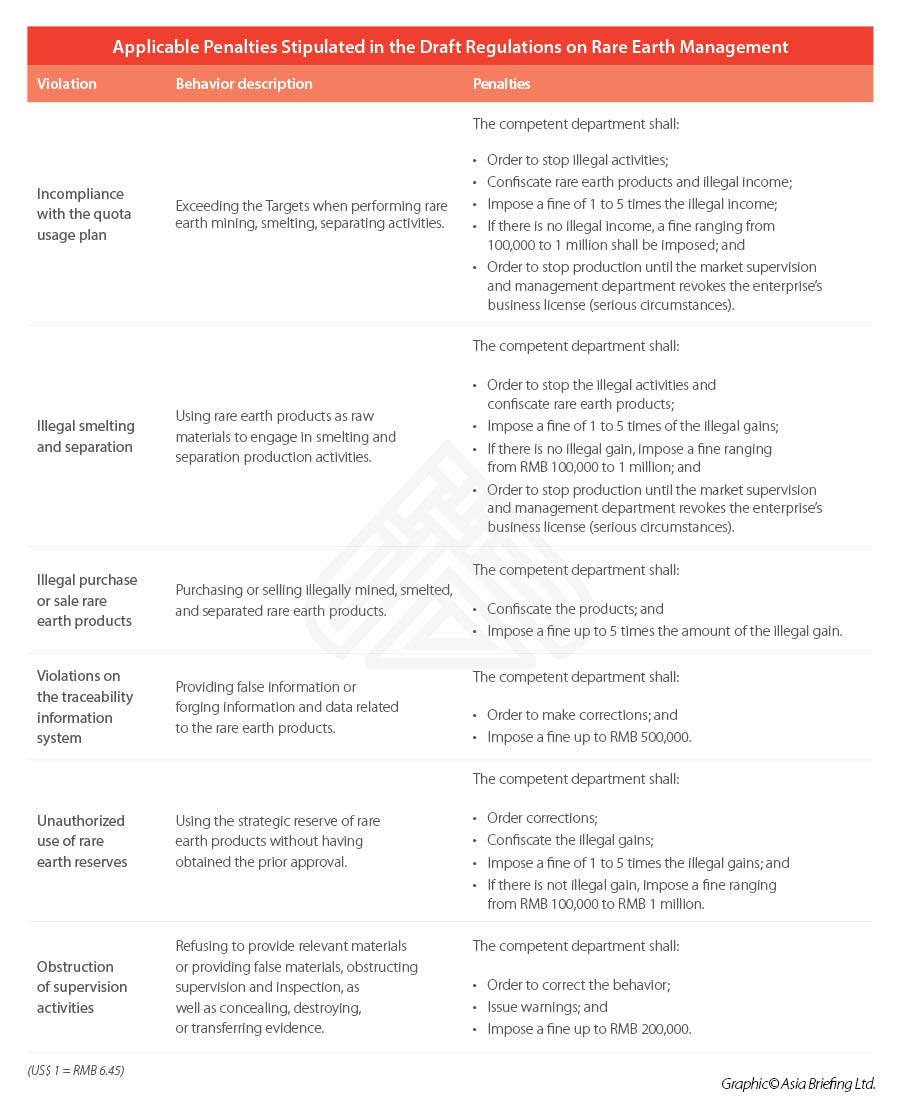 admin2 years ago
281
Returns CHINA’S Tsingshan Holding Group is set to start developing an iron ore mine and a carbon steel plant in...

admin2 years ago
89
Su-Lin Tan https://www.scmp.com/economy/china-economy/article/3122060/chinas-rare-earth-export-curbs-push-australian-miner-fast Concerns over China’s intentions were heightened when sources said Beijing could restrict exports to US, a move...

admin2 years ago
99
Russia and Indonesia are likely to benefit from an increase in China’s thermal coal import quota this year, after it...